Born: Nov. 23, 1221, Toledo, Spain Died: April 4, 1284, Seville, Spain Alfonso X, King of Castille, Leon, and Galicia, was appropriately nicknamed “El Sabio” (the Wise). His 32-year reign in Spain was a time of artistic and intellectual advances, in an atmosphere of religious tolerance and cooperation. Here are a four reasons why this … Read more

Born Oct. 1, 1865 in Paris, France Died May 17, 1935 in Paris, France After attending the Paris Conservatory, Paul Dukas became a music critic and orchestrator. As a composer, he was a perfectionist and destroyed much more than he ever published. Among his few surviving works, the most famous  was The Sorcerer’s Apprentice (1897), … Read more

Born Sept. 8, 1841 in Nelahozeves, Bohemia (now Czech Republic) Died May 1, 1904 in Prague, Austria-Hungary (now Czech Republic) For Dvorak, classical music was a vehicle to express the character of a nation, and native folk melodies were important in his works. A passionate proponent of his homeland, as was Smetana before him, he … Read more

True music must repeat the thought and inspirations of the people and the time. My people are Americans and my time is today.      – George Gershwin Born Sept. 26, 1898 in Brooklyn, New York Died July 11, 1937 in Hollywood, California George Gershwin, the son of Russian Jewish immigrants, is the quintessential American composer. … Read more

Born Sept. 25, 1906 in St. Petersburg, Russia Died Aug. 9, 1975 in Moscow, Russia A product of the Bolshevik Revolution, Shostakovich was the most famous of all  Soviet composers. He led a politically and personally troubled life, yet produced some of the century’s most celebrated and frequently performed works even today . Born into … Read more

Ray Charles overcame blindness and poverty to become a legend in American music. His gritty mix of gospel, rhythm and blues, and jazz speaks to kids as well as adults.

Born September 6, 1925 in Dunleith, Mississippi Died August 29, 1976 in Oakland, California Mathis James “Jimmy” Reed, musician and songwriter popular during the 1950’s and ‘60’s, was noted for his electric blues guitar sound, lowdown harmonica, and slack-voiced, twangy singing style (which was his charm and trademark sound which many musicians imitated). He composed … Read more

Born Sept. 4, 1892 in Aix-en-Provence, France Died June 22, 1974 in Geneva, Switzerland   “Don’t be afraid of writing something people can remember and whistle. Don’t ever feel discomfited by a melody".  Milhaud to his student Burt Bacharach Milhaud was a student of Charles Widor, Vincent d’Indy, and Paul Dukas.  A member of Les … Read more

King Henry VIII, famous for his marriages on the rocks (and the blocks), is lesser known for his talent as a musician and composer. Tall, handsome, and charming in his youth, he played several musical instruments, and was a skilled singer and dancer. Some of his musical compositions are still performed today.

This bandleader and musical parodist used “found sounds” from hiccups to gunshots in his musical spoofs, paving the way for STOMP, Blast, P.D.Q. Bach, Frank Zappa, Monty Python, & others. He (and Donald Duck) even spoofed Hitler, who probably wasn’t amused.

“I give bird-songs to those who dwell in cities and have never heard them. . .and paint colors for those who see none.” —Messiaen. He used birdsongs and colors as no musician ever had before, bringing beauty and hope even to fellow prisoners in a German POW camp.

Will the busy world stop and listen to a subway violinist at rush hour, even if he is Joshua Bell? If only we had the ears and heart of a 3-yr.-old. . .

This Italian Baroque composer spent most of his life in the royal courts of Portugal and Spain. You can hear the traces of the Spanish guitar in his keyboard sonatas.

Bizet’s Carmen was a box-office bomb, and he never lived to see it become one of the world’s most beloved operas.

Liszt’s father was a cellist in the court of Esterhazy (where Haydn had also served as composer), and he instructed his son in piano. Franz was a child prodigy, and developed an early interest in both church and gypsy music. He began to compose at age 8, and by age 9 performed his first concert. His father then took him to Vienna, where he studied piano with Carl Czerny (a pupil of Beethoven) and composition with Antonio Salieri, music director of the Viennese court (and rival to Mozart). In 1923 Liszt moved with his family to Paris, where he was refused admittance to the Paris Conservatory because he was a foreigner. He made his sensational Paris debut in 1824 and traveled with his father throughout France, Germany, Switzerland, and England to rave reviews.

His day job was selling insurance, but in his “free time” composer Charles Ives stitched together a patchwork of 19th-century America that stretched the bounds of 20th-century music.

Jazz legend Thelonious Monk’s legacy continues, thanks to his family bringing jazz education to young students, and even to the White House. 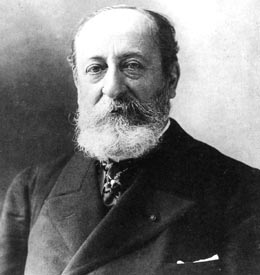 Ray Charles overcame blindness and poverty to become a legend in American music. His gritty mix of gospel, rhythm and blues, and jazz speaks to kids as well as adults.

German composers and organists Georg Bohm and J. S. Bach had much in common, and Bach praised his music. Both had to “sing for their supper” as musicians dependent on the church and their patrons.

His German opera Hansel and Gretel was the first complete opera ever broadcast on radio (1923), and is still a favorite with kids everywhere.

This innovative American composer of electronic and eclectroacoustic music is also a trailblazer in music education software for students.