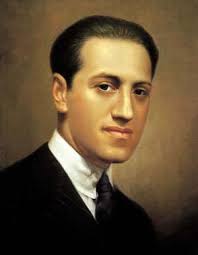 True music must repeat the thought and inspirations of the people and the time. My people are Americans and my time is today.
– George Gershwin

George Gershwin, the son of Russian Jewish immigrants, is the quintessential American composer. His music-making started in Tin Pan Alley and wound up on Broadway and in the concert halls of America. He fulfilled his destiny and lived up to his own definition of music: “True music must repeat the thought and inspirations of the people and the time. My people are Americans and my time is today.”  If ever a musician was attuned to his age and country, it was George Gershwin.

What a pity his sudden death cut short the music that flowed from this Tin Pan Alley pianist/composer whose Jazz-age songs, Broadway and Hollywood musicals, piano and concert works had catapulted him to the pinnacle of success at a young age.  Gershwin’s first published song called “When You Want ‘Em, You Can’t Have ‘Em” earned him five dollars. Soon after he composed “Swanee” (with lyricist Irving Ceaser) and sold over a million copies. His star continued to rise until at age 39 he suddenly died, following a concert at the Hollywood Bowl. An irony of his short life is that estimates of earnings accrued during his lifetime rate him as the wealthiest composer of all time (The Guardian). Alas, “When You Want ‘Em, You Can’t Have ‘Em” and when you’ve earned the dough there’s no time to spend it.

Hear Gershwin playing his own Rhapsody in Blue in an early recording, which seems a bit fast but is not without its charms, and I love the “vinyl” sound quality of these old recordings:

Personal Footnote:
In my own life Rhapsody in Blue was pivotal. On a trip to Dallas from my small home town in West Texas, I bought a copy of Rhapsody in Blue in Whittle’s Music Store, a revered Dallas institution which no longer exists.  I convinced my piano teacher Blanche Freeman to let me tackle it. I put everything I had into learning that piece, and it gave back generously. I have never identified with a work as closely as I did Rhapsody in Blue. The big jazz-inspired sounds of the city you hear in the piece captured my small-town ears and imagination. Even today I get inspired when walking on the streets of New York, and I thank Gershwin for the music that still sings in my ears and heart. And I still have my cherished copy of Rhapsody in Blue, with its tattered blue cover.

Gershwin’s Rhapsody in Blue by Anna Harwell Celenza, illustrated by JoAnn E. Kitchel. Introduce kids to the story and music of Gershwin’s Rhapsody in Blue in this Hardback and CD.  George Gershwin reads in the newspaper that he is performing a new concerto in Aeolian Hall in a few weeks. This is news to him! With encouragement from Paul Whiteman, and his brother Ira, he takes on the task and creates a truly American concerto–a musical kaleidoscope of urban sounds of the Jazz Age. Along the way we get glimpses of the musical scene in the 20’s in America. CD has a performance by Gershwin on a 1925 piano roll and accompanied by the Columbia Jazz Band. Hardback & CD #6582  $21.95 (available online at Music in Motion)

Getting to Know. . .George Gershwin. Mike Venezia introduces young readers to classical music and to the lives of composers through playful tales, cartoons and source illustrations from the period.  This Gershwin book is one of a series for ages 4-9. Paperback Q364  $7.95 (from Music in Motion)