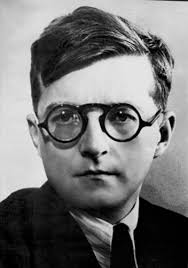 A product of the Bolshevik Revolution, Shostakovich was the most famous of all  Soviet composers. He led a politically and personally troubled life, yet produced some of the century’s most celebrated and frequently performed works even today .

Born into a politically explosive era, with a revolutionary grandfather, leftist trade unionist father and a piano teaching mother, is it any wonder his political and musical wires were crossed? The demons of his life were the political fears and threats which constantly hovered over his career. He was the “darling” of the Soviets one moment and branded a “counter-revolutionary” in his music the next moment. His tumultuous relationship with Stalin was a yoke he could never shed, and his music always involved a dreaded dance with the devil of Soviet censorship and artistic control. His works were officially denounced in 1936 and 1948, and were periodically banned. Yet the ever popular Shostakovich received many accolades during his long career, from both the Russian people and the official Soviet state.

Shostakovich composed 15 symphonies, among them the popular “War” Symphonies Nos. 4 – 9 (which some thought were his musical protest against the crimes of Stalin), 15 string quartets, 6 concertos, numerous other chamber and orchestral works, piano pieces including 2 sonatas and 24 preludes and fugues for piano (like Bach),  2 operas and an operetta, 3 ballets, songs, cantatas, oratorios, stage and film music. His music ran the emotional gamut, from “warlike” and harshly propagandist to lyric and personal.  Probably because of his “pact with the Soviet devil,” Shostakovich’s place in musical history is controversial. While musicologist David Fanning in Grove writes that “he succeeded in forging a musical language of colossal emotional power,” Pierre Boulez dismissed him as a second or  even third-rate Mahler. English composer/musicologist Robin Holloway described his music as "battleship-grey in melody and harmony, factory-functional in structure; in content all rhetoric and coercion." But the reality of Shostakovich’s musical achievement should be judged apart from harsh political reactions to the man who, as many perceived, lacked the courage of his private convictions in standing up to Communist censorship and control. Please enjoy the richness and the inventiveness of his music, and judge not the man in political hindsight.

Tony Palmer’s film stars Ben Kingsley as Shostakovich. The film dramatizes the life of the Russian composer who opposed the directives of Stalin and defied him with his music. Palmer sensitively uses Shostakovich’s music to enhance the drama, and to deepen our understanding of how the composer felt about what was happening in his homeland. With excerpts from 11 symphonies and more, performed by the London Philharmonic. 151 min. DVD 5943 $29.95
(available at Music in Motion)

An interesting footnote to musical history:

A lighter side of Shostakovich was his passionate love of soccer, as heard in his 1929 ballet The Golden Age when he recreates an actual soccer match. Enjoy Shostakovich’s energetic soccer match–a first in music history and a thrillingly athletic display of programmatic music.  (In this Soviet ballet the Communist team travels abroad to compete with the “capitalists,” and you can guess who wins!)