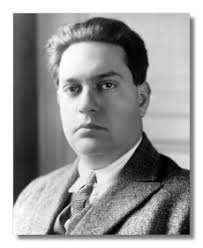 “Don’t be afraid of writing something people can remember and whistle. Don’t ever feel discomfited by a melody".  Milhaud to his student Burt Bacharach

Milhaud was a student of Charles Widor, Vincent d’Indy, and Paul Dukas.  A member of Les Six (“Group of Six” avant garde French composers), Milhaud was prolific and composed with apparent ease in many genres including operas, ballets, symphonies, concertos, solo and chamber works. Polytonality, jazz idioms (after his visit to Harlem), and Brazilian rhythms (after living in Brazil) are found in some of his works. His jazz ballet The Creation of the World and his ballet Le Boeuf sur le Toit (Ox on the Roof) were two of his most famous works. He also was a master of counterpoint, composing two string quartets (No. 14 and 15) which can also be performed as an octet (quite a contrapuntal feat!). While in Brazil he worked with French Ambassador and famous poet and playwright Paul Claudel, for whom he later wrote incidental music.