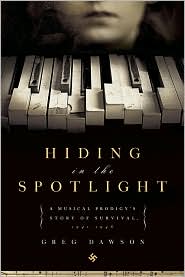 HIDING IN THE SPOTLIGHT: A Musical Prodigy’s Story of Survival 1941-46

A vivacious 14-year-old girl  finds her idyllic world shattered when Nazi troops invade her Ukrainian village.  In the bitter winter she and her family join others in a death march to Drobitsky Yar, the gaping ravines which will, in a few short days, swallow 15,000 executed Jews.  How she escapes is miraculous, but how she survives the cruel realities of war for another 5 years–by her wits and prodigious musical talent– is an even  greater miracle.  Adopting a new identity and forced to entertain SS officers and enemy soldiers with her music, she lives in constant fear of exposure by informants. This is a story you will never forget, revealed to her son after many years of silence on the subject of the Holocaust.  Her harrowing experiences never kill her spirit or the music within her.  Hiding in the Spotlight tracks the journey of a little girl who must fulfill her father’s last words to her: “I don’t care what you do, just live!” When that courageous and difficult journey leads to Juilliard, her father’s words still ring in her ears.  This book renews our wonder at the power of music to sustain the human spirit.
Hardback 7701  $25.00  order now

Praises for Hiding in the Spotlight:

“The story is unflinching not only in its tales of turmoil and peril, but in its unstinting and never-failing sense of pride, survival, and utter joy that can only be the fruit of musical love.” – Christopher O’Riley, NPR host of From the Top

“Summoning all the colors of a Chopin prelude, Greg Dawson has painted a vivid picture of his mother from her fairy tale childhood in the Ukraine to her final escape from the Nazis and her triumphant voyage to America.” – Mona Golabek, host of The Romantic Hours, Grammy-nominated pianist, and author of The Children of Willesden Lane